Sri Ramakrishna, known as Gadadhar in his childhood, was born on February 17, 1836 at Kamarpukur about sixty miles from Calcutta. His parents, Khudiram (father) and Chandramani (mother), were pious and extremely religious, but they were financially poor making both ends meet with great difficulty. Khudiram, while away from home at Gaya, had a vision in which he was told by Lord Vishnu that he would be born to him as his son. Around same time, Chandramani saw a vision of light emanating from Shiva linga and entering her womb. She collapsed on the floor and realized later that she conceived.

Gadadhar was liked by one and all in the village because of his sweet nature and talents in various fine arts. He, however, was not fond of a regular school because his keen intellect found out that the so-called education is only for earning money devoid of any real wisdom. He lost his father at the age of seven which made him more serious and in-drawn. He served monks who stopped at his village during their pilgrimage and listened with rapt attention to the discussions they often had among themselves over religious issues. As a child, he collapsed in ecstasy watching a line of white cranes fly by against the dark clouds in the background and also when acting as Lord Shiva on a stage in the village: a forerunner of what was to be seen later in his life. 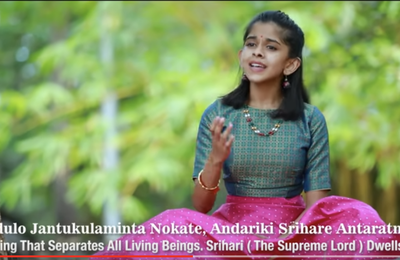